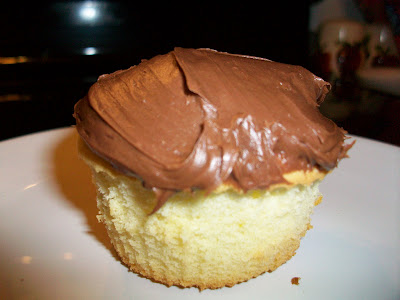 So right about now i see in your eyes that if you're a woman you're thinking "Right On Sister! Cupcakes and Chocolate... perfect filler for a craving" and if you're a man you're think "Sweet, food" and let me tell you think is sweetness and quite deceiving! lol!
So This Cupcake baking story begins with Chris coming to me and saying that he would REALLY like me to make a lemon cake. I'm thinking on it, begin searching for recipes... then BAM! Craving hits me like a mac truck (no i'm not pregnant i'm getting a visit from... okay TMI you get the point, moving on...) i NEEDED raspberries and chocolate! I don't mean i wanted.. it was a DIRE NEED!! BUT i also knew i didn't want to overwhelm my "not a huge sweet fan" husband with a raspberry chocolate overload, so i decided to throw in his lemon cake! Oooh YEA!
So since we all like simple servings i decided to make cupcakes! I found a lemon cake recipe that was a former first ladies i believe... and she must have been a democrat because it was full of it! HA, not funny? ok ok you can laugh at ME later...
well honestly this was NOT a very good recipe so i'm not posting it... the cupcake was VERY heavy and sort of hard... so it wasnt bad, tasted good, just not fluffy deliousness.
Directions
So Make a cake batter (mine might be boxed next time!) and make your cupcakes. Once they have cooled, scoop out a small amount of the center... kinda of the size of one of those slugger marbles (you know the big ones you used to knock the little ones out of the circle, never played marbles.. oh well guess you'll have to guesstimate!)
Then pour raspberry preserves in the center (i used oh wonderful store bought kind and stirred them until it became more liquidy) then i covered the preserves with some of the cake i scooped out and then topped it with Whipped creamy chocolate icing *uh yea no recipe for this either b/c it was store bought...(whatever i just wanted CHOCOLATE)!
These are amazing (minus the heaviness of the cupcake) Chris said if they were a fluffier cupcake it would be his favorite desert, so i'll be making these again... with a recipe i like hopefully! So enjoy my cupcakes that are full if it (yes it was my idea for the filling and i'm a republican so i guess i'm full of it now... oh well)! 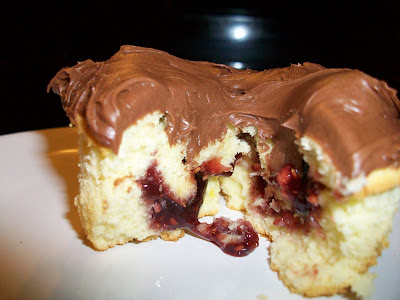