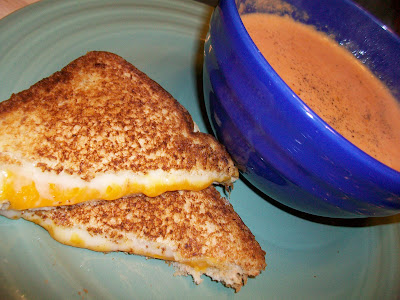 So in reviewing a few of my post i've noticed that i'm always telling you what Chris thought about what i made... because most of the time he's the only one that taste it... so i thought i should explain Chris to ya'll so you'll understand what a big compliment it is if he likes something. Chris WAS a very picky eater. I think this steamed from when he was a child he would try something and not like it (i know shocking for a five year old not to like something, lol) and then his mom would never make it for him again. And honestly i don't blame her because trying to get Chris to eat or do something that he doesn't want to eat or do is a feat! BUT i make it REALLY easy for him so we don't fight about it... i make dinner, he can eat it or make his own, SIMPLE! I love cooking but i'm not a short order chef, so what i make you eat!
Actually this has worked out QUITE well because Chris normally starts the meal complaining about how he's not going to like it (b/c it might have vegetables in it or something equally crazy) and then sneaks into the kitchen hoping i don't notice him getting seconds! HAHA! OKay it's not THAT bad but pretty darn close!
Since we've been married Chris now eats and enjoys broccoli, tomatoes, artichokes, ground turkey, and numerous others.

So last night i decided it was a great night for tomato soup and grilled cheese. I was going to be lazy about it and buy the soup and just throw together some grilled cheese, but then the "what's cooking board" got the better of me and caved to making it myself! So i got a great recipe from Epicurious and tweaked it a bit and then decided my grilled cheese should be with American cheese AND cheddar! Yummm! Once i told Chris that i made homemade Tomato soup he was INSTANTLY disappointed (yes, my husband is special), at least he was disappointed until he tasted it! Huge hit! He LOVED it! We were both sad i didn't make more to freeze for another date! So without further ado!!!

Directions
Melt butter in a soup pot. Add onion and cook over medium heat, stirring, until the onion is softened but not browned. Sprinkle flour over the butter mixture and continue to stir and cook for 2 minutes. Slowly add milk, bay leaf, sugar, salt, garlic, and pepper. Continue to cook and stir until slightly thickened. Stir baking soda into the tomatoes. Add tomatoes to milk mixture and bring to just a simmer. Take mixture now into a food processor (or blender, like i did) and puree. Throw back in pot (okay please don't throw, pour, gezzz) and reheat before serving!
Sprinkle top with a little pepper and whala! 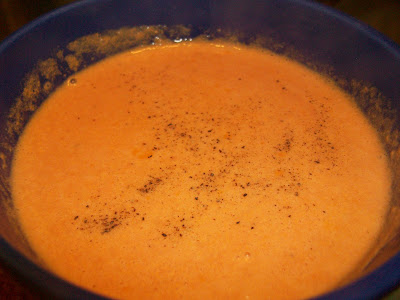 this looks so good!
i gave you a blog award!
click here to pick it up:
http://cookinkira.blogspot.com/