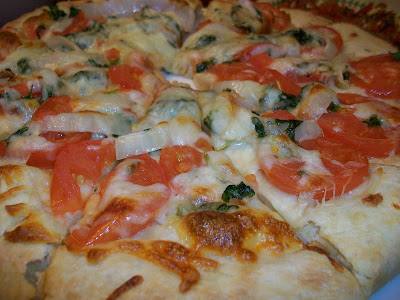 Only this is a weight watchers kind... sort of... well it's supposed to be~
So it would have been EXCEPT instead of using wheat pizza dough i used pizza dough i already had made in the freezer~ So for the sake of giving you a weight watchers recipe we're going to pretend that i used the correct pizza crust! It was a big hit though, can't say if i can really use this review though for you since it was the wrong crust, but whateve!~

I forgot the point value so i'll look it up when i get home!
Posted by breedwoman

Also, instead of whole wheat crust, I sometimes use a whole wheat tortilla for single size pizzas. It's basically very similar to the artisan crusts you find at some restaurants.