Lets Drink Pork and Have a Beer Bread! 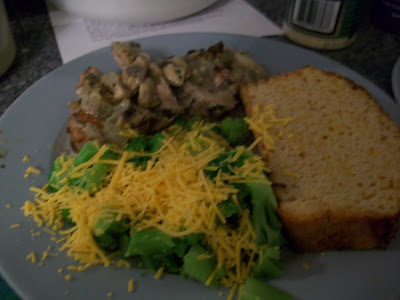 NO! I'm not an alcoholic I just saw this bread and thought WOW Chris would love it and his friend was coming into town and he would love it! YES, you use beer to make it but that's so you don't have to use yeast... and man it was tasty! AND the story behind the "Lets Drink Pork" is I had a pork tenderloin and I didn't want to just bake it or something equally boring so I baked it with seasonings and then topped it with a white wine mushroom sauce, Why YES my house was very gourmet last night!

Soo since I have an ACTUAL recipe for the bread we'll begin with that!
Here is the cheesy beer bread... thank you Elizabeth's Edible Experience for the idea! 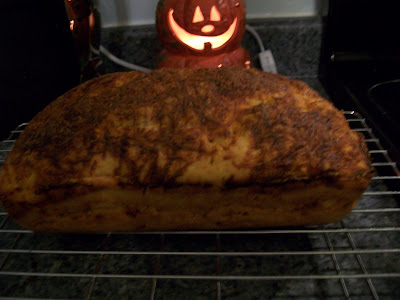 Gezzz ook OKAY! Now on to the pork. HMMM
So I'm just going to type what I did and I'll try to tell you general amounts but I really just dabbled this and that until it tasted like something I would eat.

So i Baked my pork loins in the oven on 350 for lets say around an hour?? (Just check it) Before I placed it in the oven i sprinkled with salt, pepper, parsley, garlic powder, thyme, and lets say basil.
For the sauce
I began but sauteing chives and diced onion (only like half a small onion and 1/3 a bunch of chives) in olive oil and 2 tbsp butter. Then I added some garlic salt. Later when the onions were becoming transparent I added oregano, basil, parsley, salt, and pepper. I cooked that for a minute then add around a cup or so of a Chardonnay that I had in my fridge and about a cup and a half, maybe more, of chicken broth. Got that nice and warm and added sliced mushrooms (I would have LOVE cremimi BUT my grocer does not sell these so I used the standard white ones) and just kind broke them into smaller pieces as a cooked it. Then I was thinking "Self this needs something else to deepen the flavor", so I called up my trusty mom and she had the trick in mind Parmesan cheese! YEA! Threw that in, lets say 1/4 cup? Then i just let it cook... when chris got home I add a few table spoons of flour to thicken it and whisked that until it was smooth!
BASICALLY this is what I did... threw stuff in, tasted and threw more in of what I thought it needed. Some may not want as much wine, but I really enjoyed the flavor it added, etc.

When everything was ready, I sliced the pork, placed it on the plates and covered with the sauce. Chris LOVED this, I hope I'll be able to recreate it! Enjoy! 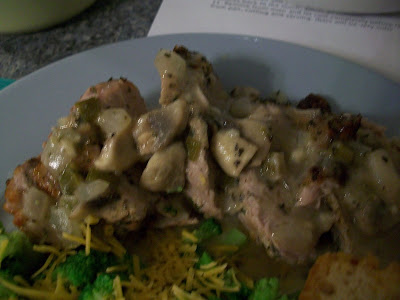 YUM! That dinner looks so good. I bet the boys loved it!